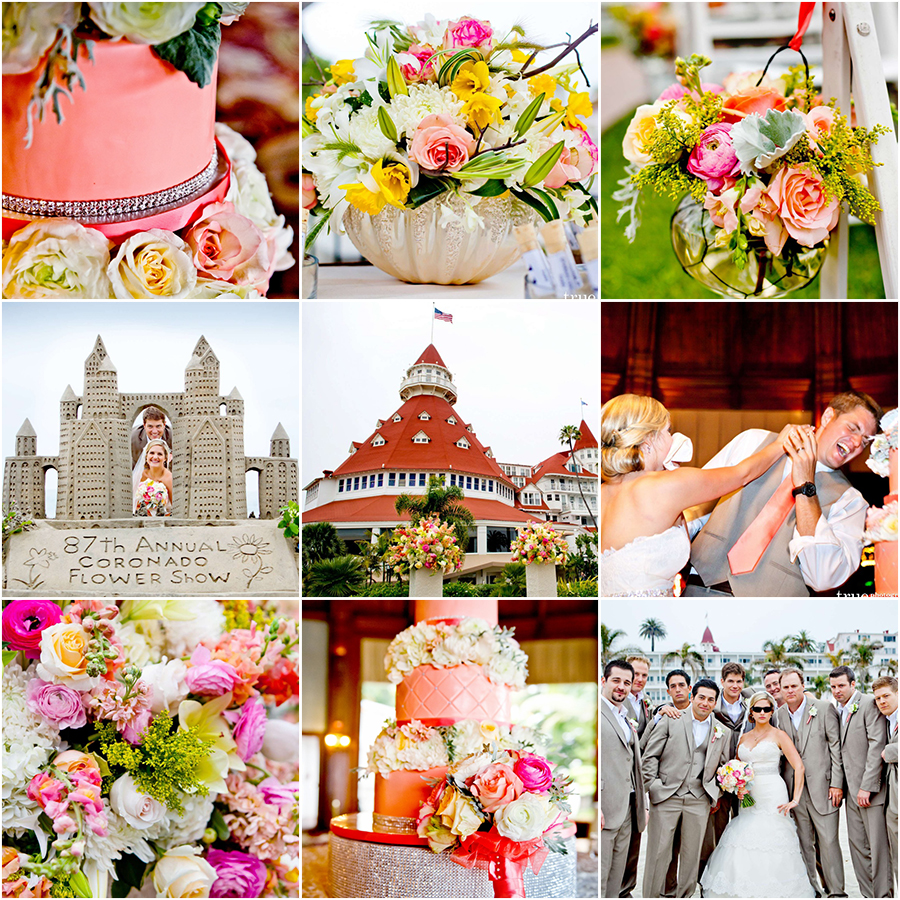 Photos by TRUE Photography Weddings
Beach weddings are a popular wedding option nowadays, and San Diego is one of the most-perfect spots for an exquisite beach wedding.
So recently, two of our fine vendors, Embellishmint Floral & Event Design and Sweet Cheeks Baking Company worked together to make one special couple’s beach wedding in Coronado a success!
It happened to be one perfect Coronado Beach day, equipped with giant sand castle – a great photo opp.  The couple, Avery & Thomas, have such a darling sense of style and comfort together.  Their quite stunning bridal party added to the charismatic bride & groom with humor & beach-side antics.
For this couple, the colors were coral as well as other natural beach tones.  Dawn Stone, of Embellishmint, decorated the ceremony aisle with hanging glass bulbs on the aisle chairs.  They were the perfect little pots of cuteness.  At the same time, the floral arrangements at the ceremony altar blew the house down in grandeur!  Dawn’s incredible use of stock, ranunculus, roses, hydrangea, and other wild flowers made these flower arrangements, both on tables and within the cake tiers, pop with intense color while at the same time as being beautifully delicate.
When it came to the cake, Sweets Cheeks Baking Co. came up with a delicious combination of Vanilla Bean Sour Cream Cake with Luscious Cream Cheese Filling and Italian Butter Cream.  The couple selected not only select a stunning cake design, but then during the reception, they took it upon themselves to have some fun and play around with one another, in a fashion that involved a lot of cake in the face!
It was the perfect beach wedding in San Diego, and all the wedding vendors involved made this day lots of fun and extra special!
Venue: Hotel Del Coronado
Cake:  Sweet Cheeks Baking Co.
Florist: Embellishmint Floral & Event Design Studio
Wedding Dress: Here Comes the Bride
Makeup: Lipstick & Luster
Coordinator: Mint Weddings
Officiant: Reverend Powers
Invitation: Seaside Papery

When Michael Kiesling proposed to Heather Hendren at the Hotel del Coronado last fall, they agreed they would like to get married there, too. Then they found out using the historic venue would set them back a minimum of $20,000.

That was their first wake-up call.

“I was never going to touch that. It was obscene,” said Hendren, 32, a finance manager for Johnson & Johnson Pharmaceutical Research & Developmental in La Jolla. “With the economy the way it is, you can’t afford to take on that kind of debt. You just can’t.”

An average wedding in America cost nearly $30,000 last year, according to a survey conducted by The Knot Wedding Network. The survey of 18,000 couples married in 2008 also indicated 40 percent of couples marrying this year will curb their wedding budgets by about 16 percent because of the recession.

Through the process of planning their April 25 wedding, Hendren and Kiesling, like many engaged couples, had to find ways to scale back their dreams without sacrificing on the celebration. Every step they made was with an eye fixed squarely on the down economy and shaky job market.

After researching dozens of venues, they chose St. Paul’s Episcopal Cathedral for the ceremony and the Museum of San Diego History in Balboa Park for their reception. The couple was able to rent the museum for $3,000 for the entire day, a $4,000 savings from the least expensive hotel they found.

The Rivini gown Hendren kept gravitating toward in bridal magazines cost $5,800. She ultimately chose an off-the-rack number on sale for $1,600.

The couple’s dream of having a vintage Rolls Royce ferry them about on their special day was quickly nixed when they learned of the Rolls’ $700-an-hour price tag. Their pie-in-the-sky wish of a 16-piece band and gobo lighting at the reception was abandoned altogether.

Hardest of all was having to ruthlessly hone their desired guest list from 200 to 70.

Wedding coordinator Cynthia Zatkin of Cynthia Zatkin Events, who provided Hendren with “day of” services, said having a smaller wedding is the single most effective way a couple can reduce expenses. Guest lists of 50 to 100 are the norm this year, she said, compared to the 300-guest weddings of the past.

“You save so much money in every way,” Zatkin said. “Less food, less tables, fewer centerpieces, fewer linens. I see a lot of clients who still want a lovely event that is gorgeous, but on a smaller budget.”

Zatkin said she is also seeing some couples bypass 2009 in favor of 2010 and beyond.

“People are hoping the stock market will go back up and their portfolios will get bigger,” she said. “By the time they are paying for their wedding, they will have the money to do it.”

Zatkin tells the vendors she works with that business may be down this year and next, but to set their sights on 2011.

“We know it’s coming back,” Zatkin said. “The economy is not in the tank forever.”

Betsy Winsett, co-owner of the Encinitas-based Bridal Bazaar, which produces bridal shows in Southern California, is seeing brides trim their sails in a number of ways. While some brides are delaying their nuptials, she says most want to get started on their new life now and are willing to economize in ways they might not have considered when they first got engaged.

For example, flowers adorning the ceremony now often do double duty at the reception site, Winsett said. To cut expenses, some couples go the D.I.Y. route, making their own favors, place cards and programs, and many opt to marry on a Friday or Sunday rather than the ever-popular Saturday.

Couples are also being more selective in what they pay for, such as hiring a photographer for fewer hours or choosing a smaller tiered cake for reception photos and serving guests less expensive sheet cakes, Winsett said. And brides are getting savvy about asking vendors those seven important words, “Is that the best you can do?”

“The smart vendors recognize during a down economy that they do have to make accommodations,” Winsett said. “Happy brides today tell their friends who are getting married tomorrow and that is part of a vendor’s customer base. The smart vendors are looking at that as an opportunity.”

“Vendors are bending over backwards,” agreed Sharon Cole, a member of the Association of Bridal Consultants and owner of A Dream Wedding By Sharon. “In reality, I think brides are getting the best value for their money this year.”

Nearly every vendor Hendren chose – from her wedding coordinator, an essential expenditure considering her 60-hour work weeks – to the photographer, caterer and Internet chocolatier willing to sell her truffles at 55 cents a piece as opposed to the typical $3 a piece, slashed their prices 15 percent to 40 percent. Even Hendren’s church defrayed the cost of the flowers for the ceremony for a $100 donation and the couple’s promise to leave behind the arrangements for the regular congregation.

“It’s an all-around hurt issue, not just for brides and grooms, but for the vendors and everyone else,” Hendren said just weeks before her wedding. “I’ve been honest with people, saying ‘This is what I’ve got to spend. What is the best package I can get?’

“We had to work so much harder for what we wanted,” Hendren added. “As a financial professional, looking at my spreadsheets, I had no idea in my wildest dreams that it would be this expensive. We easily could have spent double.”

Written by Caroline Dipping for the San Diego UNION-TRIBUNE