Sometimes you just never know when you’ll meet that special someone, and for Grace and Alex, the stars aligned, and through mutual friends, their paths crossed.  At the time, Alex was only in San Diego for a summer internship, and Grace was a local resident.  They spent time together with friends, shared in some fun, and by the end of the summer, the two enjoyed their first date alone.  The connection was strong, and even though it was now the end of the summer and Alex was returning to school in FL, the couple stayed in touch and maintained a bi-coastal relationship!

Fast forward a year, and the two were finally on the same coast!  Their courtship spanned a couple of years after that, and in the city where they first met, they married under the stars at Mt Woodson Castle.  The night was perfect.  Thanks to the musical talents of wedding DJ, Andy Hagenah of The Groove Wedding DJ, the couple, with their family and friends, enjoyed a night of dancing and photo booth fun.  Studio Carre’ Photographie captured the memories, and there were plenty made!  The wedding lasted well into the night!

Grace and Alex’s wedding was a grand affair, and to make such a night possible, only the best wedding vendors were used!  The bride looked her best thanks to wedding hair and makeup by Meleah Hair & Makeup; the location was classic California; the music was bumping all night; and the photos will last a lifetime!

New name; same business; fresh look.  That is what is present for Andy Hagenah.  Andy started and successfully operated a leading San Diego-based DJ company, Disc Go Round DJ.  Yet, for 2014, a new approach was needed.  So, with the help of a former client of his, Andy has re-named and merged ‘Disc Go Round DJ’ into ‘The Groove,‘  rebranding an already successful DJ business into one that is more modern, hip, and above-all, experienced.

Andy, along with his partner Tim English, have been doing so much in the past year, connecting not only to his clients, but also transforming himself, so it is only appropriate that this rebranding personify the good that has come.  The Groove will continue to serve weddings, corporate events, private parties, and more, so if you know of someone, or some event, that needs good tunes, contact Andy today! 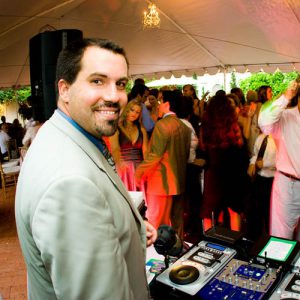 Andy has owned and operated Disc Go Round for over 15 years. He grew up in Minnesota and moved to San Diego in 1999 where he met and married his wife Amy. They have two beautiful children and Andy loves the fact that his profession allows him to spend so much time with his kids. Andy has an excellent skill for motivating people and entertaining crowds without being obnoxious or acting like the “Cheesy DJ” many people associate mobile disc jockeys as being. Andy believes that being himself and blending in, rather than trying to put on an act and be the star of the show, is one of the secrets to his success. The music knowledge, experience, and people skills that Andy has, makes him easily the perfect choice for your next event. He is very trustworthy and reliable, and you will feel like you have hired a friend when you choose to work with Andy. Check out his website here: http://www.discgorounddj.com….or by phone (760) 721-2427.